One of the many ‘non-traditional’ uses of Talking Mats has been the work that has been undertaken with university students (both undergraduate & post graduate) at the University of Stirling. Since 2008, staff in the Career Development Centre at the University have been trained to use Talking Mats as a tool to help students to articulate their career thinking and planning.
We have established from our research and trialling of a range of topic cards that students respond well to the process. While the majority of the students we work with have no speech or language difficulties, the process of TM enables students to articulate their thoughts and to feel more at ease to raise particular issues. It can be very hard for students to talk openly about financial worries, academic issues, or career anxiety. TM gives a platform for this to be done in a non-threatening way and quickly allows the Careers Adviser to see where the student is ‘at’ in their thinking. This then allows the adviser to work more efficiently & effectively to support the student to develop their career plans /strategy.
Staff feedback would indicate that they enjoy working with TM in both one to one and group settings with students. There are many perceived advantages to using TM but one of the main ones is that it can make better use of the time available and that it can be a good way to see quickly where the key issues are that need to be addressed. TM also fits well with current Career Guidance Theory, allowing the student to narrate the ‘story’ and arrive at their own solutions to the ‘problem’ under discussion.
There are of course some students who do have additional learning needs and TM is again an ideal tool. In particular, students with dyslexia and dyspraxia comment positively that the visual aspect of the cards allows them to process the information and structure their thinking in a clearer way that just talking to a careers adviser can.
International students who sometimes have poor English language skills respond well to using TM as it allows us to get a clearer picture of the students thinking than sometimes is the case from a more ‘traditional’ discussion
Action Planning and Goal setting are a big part of the Career Management process and TM is a really useful tool to ‘kick-start’ this process for students. The visual impact is powerful and enables students to see clearly what they are considering and the cards allow the students to physically move the cards to help them to decide how to move forward in their thinking and planning. Students consistently comment that they appreciated the opportunity to see clearly the issues that they are considering and allow them to move forward.

Many thanks to Elaine Watson, Careers Adviser, University of Stirling and one of our accredited trainers for this stimulating description of how she is implementingTalking Mats 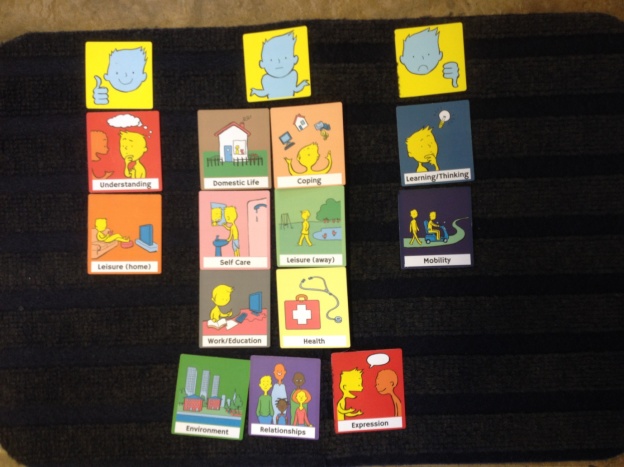 Thanks to an OT colleague for this powerful story of how Talking Mats helped a woman with Multiple Sclerosis with goal setting by getting to the root of the problems she was having.

I am an OT working in a community rehabilitation team in Scotland.  I have been seeing a woman (who I will call Jill) with MS.  Jill has been experiencing increasing problems associated with her MS and finding it difficult to cope.  During my first visit, Jill found it difficult to tell me about the problems she had been experiencing, and almost impossible to consider how we could translate these problems into tangible goals that we could work on.   She was closed to any suggestions I made about potential rehabilitation goals.  In her mind, the problems she had were there to stay, nothing could be done about them and she would just have to struggle on.  We didn’t seem to be getting anywhere just talking about it.  Jill was getting a bit exasperated and I was finding it difficult to keep a structure to our conversation and steer it towards agreeing on a goal that we could work towards.  I felt there was a real risk of her disengaging from the service because we could not agree on a way forward.

Then I decided to use Talking Mats to see if that would help.  I knew that using Talking Mats could help people with cognitive problems as well as those with communication difficulties.  I wondered if doing a general Talking Mat using the Health and Well-being TOPIC symbols would help me identify what Jill thought her main problem areas were.  Then I planned to do a sub-mat to look at her priority areas in more detail.  My aim was to try and identify one or two rehabilitation goals (reflecting Jill’s priorities) that we could work towards.  I really felt that there was potential to make a positive impact on Jill’s quality of life if I could get her to engage and agree on a goal to work towards.

Using Talking Mats proved to be a great success.  Jill very quickly got the concept of it.  It seemed to be much easier for her to pick up a symbol card, consider it, and then place it on the Mat.  Using the Mat appeared to reduce the ‘cognitive load’ of the conversation and gave her structure to work within which she found much easier.  Jill was able to identify what her main problem areas/ priorities were: – Mobility and Learning/ Thinking (see picture of her Mat above).  Jill was pleased that she had got her message across and actually seemed to enjoy the process of using Talking Mats.

Now we have got a starting point.  In my next session I’m hoping to complete sub-Mats with Jill in the Topics of Mobility and Learning/Thinking.  This will allow us to explore these areas in more detail.  Using Talking Mats was a real breakthrough in Jill’s rehabilitation. 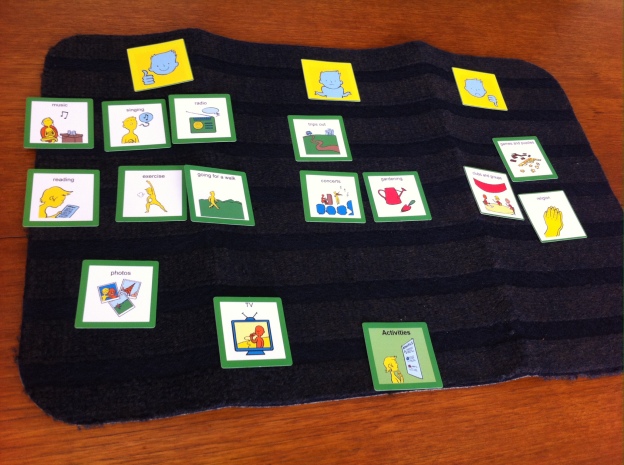 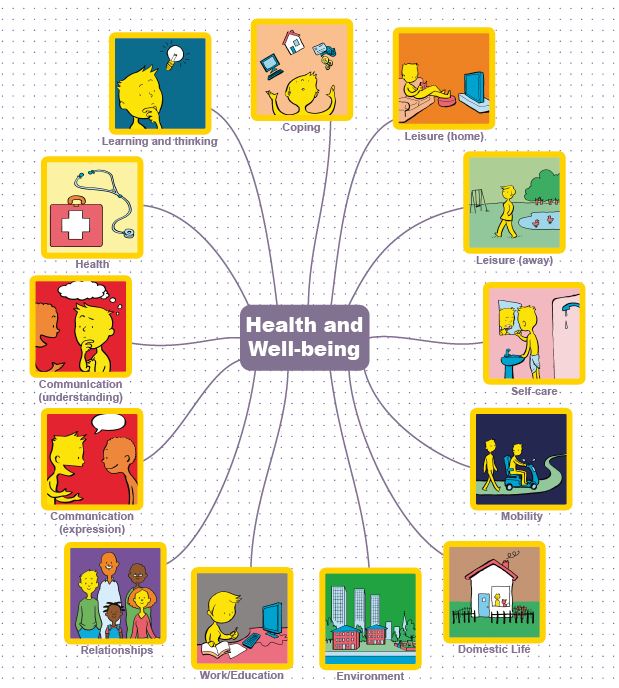 We are very grateful to Rhona Matthews for sending us this moving blog.

‘‘I met with Katie, the worker at Perth Young Carers who did the Talking Mats training and she told me this story:

It is recognised that there are many positive outcomes from being a carer.
For some young people helping care for a sibling can bring confidence, develop feelings of closeness to family and increase self esteem. However it can also add stresses and strains. Expressing frustrations or anger can be difficult and feel like a betrayal.
Using Talking Mats can make it easier to say the things that might cause upset. Using the Children and Young Person’s resource, a young person disclosed to a worker that the one aspect she was not happy about when helping look after her brother, was administering medication. She had seen this being done in hospital by injection and did not like the thought of having to do it. She was happy with all other aspects of helping with his care. The worker fed this back to her parents and they all agreed not to expect her to do this.
The worker felt that this issue would not have been highlighted without the Talking Mats.”