Getting feedback on AAC services  is particularly challenging because of the communication support needs of this group of people. It is therefore really important for AAC users to have the chance to say how they feel about the services they receive. Services need to make sure that this group of people have a voice and that there is a mechanism for their views to be taken into account in monitoring the quality of services and service planning. 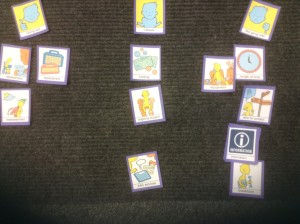 NES has funded the opportunity for professionals to attend a seminar and go away with a resource to support them to get feedback from AAC users about their service.  The Talking Mats resource was trialled and developed with Forth Valley AAC partnership and is based on AAC quality indicators (NES 2013).

This opportunity is free of charge to people in AAC partnerships in Scotland. You will attend a half day specialist seminar and go away with a free resource to use in practice.

The resource will help people find out how AAC users feel about:

It provides a model of good practice which could be extended to evaluate other services.

4 dates and locations are available.

If you are trained in Talking Mats and wish to take up this  great opportunity, please book your place as soon as possible.

Both seminars were very well attended with lots of discussion from a wide range of professionals.

During the Eating and Drinking seminar, we provided background on how and why the resource was developed and showed some DVD examples of people using the resource. This really brought things to life and showed how important it is to give people (with and without speech) the opportunity to consider and talk about different aspects of eating and drinking. We also gave people hands-on practice in using the symbols from each topic. 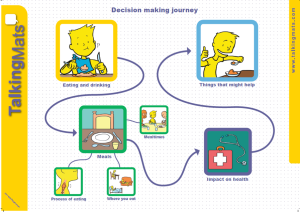 Each participant received a copy of the full resource, including symbols, a mat, and explanatory booklet.

During the Capacity seminar we discussed the fundamental principles the Capacity Act and participants had a chance to consider how Talking Mats can help people to:

They were also given the opportunity to work through some practical examples and think about options to help people understand issues and make decisions.

If you would like to attend our next specialist seminars, we are holding them in Stirling on 17th February: Stirling Seminars Feb 2015 flier 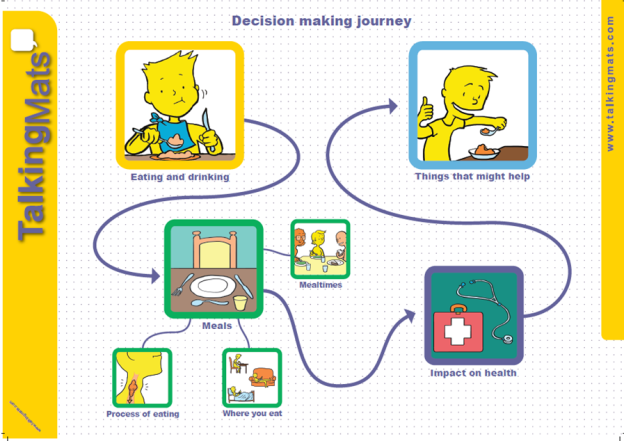 Doing the ‘meals’ mat helped Ellie to see that although she still has many difficulties, mealtimes have become less stressful. For example, although eating and drinking is still a long, slow process, Ellie and her family have adapted to this and now manage ok, especially if they plan ahead. Some useful action points were also identified for the professionals working with Ellie –  it would be good for her to have suggestions about a greater range of breakfast options as well as a variety of snacks which she could eat between meals.

Using the mats really helped to clarify the progress that Ellie has made with her eating and drinking since her stroke. 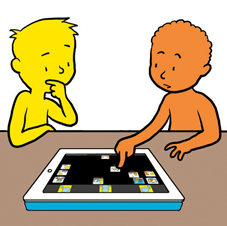 We’re delighted that Andrea Powell, an Occupational therapist in Edinburgh has written a Blog for us about her experiences of being involved in group work with people who use AAC.

As a student occupational therapist, I worked part time as a support worker with an amazing lady Jennifer, (Jennifer is a pseudonym) Jennifer just happened to use an iPad to communicate. At this time I was about to commence my final year studies and was required to research and write a dissertation on a subject of interest. The lightning bolt of inspiration came when I, with Jennifer attended a weekly AAC user support group which was run and organised by a group of SLT’s.

The group was a wonderful resource that truly benefited the people who used it. I witnessed how much Jennifer valued spending time chatting with friends who also used an AAC device and who understood the unwritten rules of engagement. Such as patience while I set up my speech, don’t look at my screen while decide what I want to say etc. Her confidence in using different types of conversation grew while attending the group. It encouraged her to add to her already wide and variety vocabulary. As her support worker I also valued the opportunity to gain access to training on how to use her AAC and how I could provide better support to her.

I began reading around AAC and how people integrate of devices into their lives.  I was however shocked to find that the wonderful group Jennifer attended was a rare occurrence for many users. The more I read, the more I realised that many users struggled to continue using an AAC device due to lack of support, access to trained professionals and most did not have wonderful resources like user support groups.

As an OT I was interested to explore the role in which I would play within AAC provision and found that as an OT I would be mainly providing support and advice on positioning, accessing devices and ergonomic type support.

However I felt that as an OT we have many more skills that didn’t appear to be to be getting utilised, within in my dissertation proposal I postulated that OT’s could expand their role within AAC to i) collaborating on assessments for AAC; ii) training on devices once they have been issued to users; and, iii) running and facilitating groups for AAC users and communications partners in the community.

OT’s are highly trained specialists skilled at understanding what is achievable and realistic for an individual. Occupational therapists assess individuals holistically in order to establish realistic and manageable goals which can be graded and adapted to suit the individual. Through the utilisation of appropriate grading of an occupation, a user can experience success and therefore less failure and frustration, ensuring the challenge is set at the appropriate level for the individual concerned (Park 2009).

Running and facilitating groups as a therapeutic tool is something that occupational therapists have been doing since the earliest days of the profession and groups are now utilised in many areas of practice (Howe and Schwartzberg 2001). By continuing this tradition, occupational therapists are well placed to take the lead in running and facilitating groups for AAC users, integrating social and community activities into the groups, for example, meeting in local shops to provide real life experience of interactions and, importantly, promoting the use of AAC to the general public. There are similar projects being attempted in Motherwell to increase the awareness of Dementia and make local businesses “Dementia friendly” (Shafii and Crockett 2013). Providing groups for AAC users not only enables them to learn how to use their devices, but also provides a support network of other users and communication partners.

I feel that if the skills of an OT were utilised in more than ergonomics then more positive outcomes could be seen for the user of AAC. I believe that if there were more OT’s taking on additional roles within AAC provision it could help reduce the pressure for SLT’s and the waiting lists to see SLT’s. It would also enable more users to be assessed to use AAC.

Angela is a speech and language therapist in Northern Ireland where she works with people with learning disabilities. She worked with John who had some difficulties with eating and drinking. Together they used Talking Mats to help John understand his risk of choking and identify foods which were easy or difficult to eat. Watch this film clip where John describes how Talking Mats helped him to understand and manage his risk of choking.