Many thanks to Helen Paterson, one of our accredited trainers for this fascinating blog.

Now that Talking Mats is accessible in a digital format, the Talking Mats team are often asked ‘Can it be used on an eye gaze device?’ . Of course, for those who use eye pointing reliably, they can use a standard Talking Mat, but there are those individuals with whom we work with who may want to use their eye gaze device to use a Talking Mat, and who find the digital format more accessible. We would suggest that this is only done with a client who is already familiar with eye gaze , due to the extra effort required both to use eye gaze and to make decisions when using a mat. There are many other access methods with which you could use and access Talking Mats Pro, such as a head mouse, chin joystick or touch screen, but for this blog we will focus upon eye gaze. Here’s how we made it possible, and I am sure there may be other ways which we would love to hear about!

This is where the 2 systems differ: 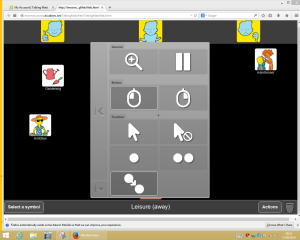 In mouse emulation mode, the user is emulating and controlling a mouse pointer on the screen. This function is available with software such as: Tobii Gaze Interaction in Mouse Emulation Mode (shown above), Alea Intelligaze, Eye Tribe with Dwell Clicker, Tellus 4 with TM4 eye tech, or the Windows App within the Sensory Software’s The Grid 2 FastTalker2 user. 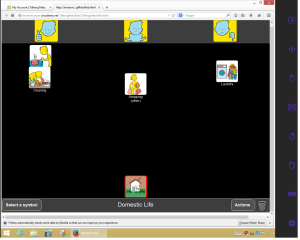 With Gaze selection (Tobii only) the user can control a Windows desktop with a two step selection method. The first step involves selecting the desired task from the taskbar on the right of the screen. The person looks at it until it changes to white. The person then looks at the part of the screen where they want the task to take place.

This does require some more thinking on the side of the client as they need to look to where they want it to go and they are not just dragging it as they are in mouse emulation mode.

For individuals who do not have a calibration good enough to use mouse emulation or gaze selection, it is a little more complex. A Talking Mat could be emulated from software such as The Grid 2 or Communicator, but it would not involve the software from Talking Mats Pro or dragging of symbols and moving them to where the person wants them to go.

Thanks to Anita Devi,Education Consultant, for her helpful contribution to this blog.

The implementation of the recent SEND reforms in England requires interdisciplinary teamwork. Integrated assessments will now be carried out in cooperation with the young person and the parents. Capturing the child’s own perspective and recording their views, interests and aspirations is now a statutory requirement. The principles of the SEND Code of Practice state that practitioners should encourage the child or young person, and the child’s parents to participate as fully as possible in the decisions affecting their lives and use a common language to shape educational and other outcomes.

Talking Mats has produced a practical and creative resource – “Consulting Children & Young People” that helps practitioners to ensure that they take account of the SEND Principles at all stages of the assessment process and development of the EHC Plan.

We recognised the need to develop a tool that would give a holistic picture of how a child or young person feels about their lives at home, at school and in their communities. Having a visual framework means that there’s more time for reflection. You can help young people to see their personal strengths and abilities and take time to consider what their problem areas are.  Talking Mats gives greater choice and control about what kind of intervention is required to support them.

Communication is a two way process and the role of the facilitator is crucial. Talking Mats provides training at the following levels:

Improving the quality of your engagement

Creating a visual framework for consultation

Read Part 2 of this blog next week.