We have received a number of requests to create a guide to adding your own images and creating submats with Digital Talking Mats and this blog will show you how.

One of the features of Talking Mats is that we have developed a number of different symbol resources based on our research and clinical practice which cover a wide range of topics.
However, sometimes you may want to personalise what is being communicated about by adding your own images. You may also want to create a submat to explore an existing topic in more detail or you may want to create a completely new topic. In our training courses we explain how to do this when using the original Talking Mats.

However more and more people are now using the digital version of Talking Mats. In a previous blog we described how to add your own photos to the Digital Talking Mats.

We have now made a guide to help those who have the digital version to both add their own images and to create a submat with an example of a sub-mat with the topic “office”.

Download the following pdf to find out how to do it. dtm-a-guide-how-to-add-photos

This blog describes the foundation Talking Mats course we ran for members of the National Involvement Network. Following the seminars and the work to design a Charter for Involvement ‘Taking Part Talking Mat’ described in a previous blog , 16 people attended our  course run over three days with about a month between each session. The participants were 8 NIN members who all had a worker to support them as a learning partner. Their role was to assist with embedding the knowledge gained, and the implementation of the pilot ‘Taking Part Talking Mat’.  The learning partners were equal course participants, and expected to complete all course activities e.g. make a video of themselves carrying out a Talking Mat

In adapting the foundation Talking Mats course we learnt lots!  Here is a summary of key learning.

We are incredibly proud of our cohort of trained Talking Mats listeners.  As part of the project they have been interviewing other service users in their organisations about 2 aspects of the Charter for Involvement –‘independence’ and ‘being involved in their community’ – ( 2 abstract concepts, as the NIN listeners will tell you).    Not only has this included more people in service evaluation but has led to making changes that are improving lives.

One man who everyone thought was doing really well living on his own expressed a view that he was feeling  lonely, He is now being supported to identify if there are enough people interested to start a local group.

Over the past 9 months Rhona and I have been delighted and privileged to work on the Charter for Involvement with members of The National Involvement Network (NIN) . The NIN is a Scottish wide group of people with learning disabilities who want to have more say over the services they use

They have developed the Charter for Involvement.  This Charter has 12 clear statements that set out how people want to be involved in their own lives, their services and their communities. For example

Organisations from a wide range of settings sign up to the Charter and commit to ensure their services put the statements into practice, as they are relevant to people everywhere.   ARC  Scotland is the organisation that supports the work of the NIN.

At a Scottish Government Keys to Life event at the Scottish Parliament James Fletcher Director of ARC Scotland and Lois got talking about how we could help services reflect on the extent they were meeting the Charter aims from the perspective of people who need extra support with communication, and  the seeds of this project were sown. Feedback was it can be difficult for  organisations to support the people who use their services to  become  truly connected and involved in the  local community  . In addition there can be a tension about supporting   people to be more independent and autonomous when we live in a risk averse  service culture.

Could we develop a Talking mat that would allow members of the NIN  to explore  statements 2  and 3 of the Charter . What aspects of living independently and being involved in their community were going well for them and what aspects were not going so well?     Keys to Life was recognising the importance of social connectedness  and the subsequent ARC application for money to do this in partnership with Talking Mats was successful .

The first task in creating a Talking Mats is to unpick the meaning in this case the meaning of the two statements .    What do we mean when we say we are involved or that we are independent?   What does successful involvement or independence look like?   To explore this we held three seminars with NIN members in Edinburgh , Glasgow and then Dundee . The groups initially started with a blank sheet of paper on which we would mind map their thoughts and ideas.As the seminar progressed we would bring in ideas from the earlier groups and after much debate reached a consensus.   It was recognised there were too many items for one Talking Mat.  It was decided to create  two  Mats,   one that would deal with words and symbols  that were easier to understand and more likely to be in people’s lived experience 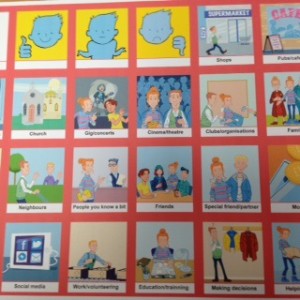 It included options such as Leisure centre, Neighbours ,Work/ volunteering. The  other Talking Mat would contain the more abstract words and symbols . e.g Being accepted , Taking risks

It was recognised from the outset that there would be some people with a learning disability who would not be able to respond to the more abstract Talking Mat.

The Charter for Involvement has its own design and style and therefore it was agreed that The Talking Mat would fit into its brand and that we would work with their artist. The Talking Mats are called Taking Part (1 for the more  concrete mat ) and Taking Part (2 for the more abstract)   Once the Mat was created the training with Nin Members could commence but that is for another blog!