Many thanks to Cheryl Strutt for this lovely blog about how she developed and used an Aromatherapy Talking Mat with people with learning disability.

I am an Aromatherapist who works with adults who have a learning disability and often additional communication difficulties. As part of a recent service review I wanted to develop patient involvement. Talking Mats (TM) was suggested as a possible option to support patient feedback. I decided to look into this tool further and access training. During my TMs training I was supported to develop my specific Aromatherapy TM. The main aim behind this initiative was to adopt a system that could identify how each patient felt about the service and identify if there were areas where changes or improvements could be made. I wanted to work closely, alongside each patient, in order to learn how they really felt about their Aromatherapy treatments, their likes/dislikes etc. and to give them a sense of ownership of their sessions. It’s all about giving individuals with a communication difficulty a voice that can be heard. 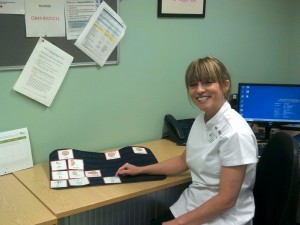 The Aromatherapy TM supported patients to understand what is involved in an aromatherapy session and has been effective in helping them to personalise their session.

I used the Aromatherapy TM within the patient’s first session and following their last session, taking a photograph of the completed mats as evidence. The TM is an excellent way of offering a range of different types of massage experience and the patient can select their preferences. I found it an excellent way, to obtain valuable feedback on patient experience. One patient with a severe learning disability and autism was able through the use of symbols, to indicate his dislike for the music being played during his Aromatherapy session. He has no verbal means of communication and feedback like this would not have been achieved if the Aromatherapy TM wasn’t used. Through the implementation of the TM I now have evidence of patient centred practice, in relation to the therapeutic value of the Aromatherapy Service. The Aromatherapy TM supported patients to understand what is involved in an aromatherapy session and has been effective in helping them to personalise their session.

Since the implementation of the Aromatherapy TM, patient feedback is now at the heart of the Service. The patient is now able to openly give comments, make choices on their treatment plan, which in turn is making their attendance at the department, a very pleasurable one and it’s very personal to the individual. Another patient who said that he wasn’t able to read or write, was able to explain what the symbols meant and chose the symbol for happy. He went on to indicate his preferences stating ‘I like foot-spa and a foot massage.’ Prior to using the TMs, I was often reliant on observing the patient’s body language to assess their level of enjoyment and gain feedback. The Aromatherapy TM now allows for a more accurate method of evaluating interventions. I am so enthusiastic about the increased level of patient involvement and the willingness of the patients to become involved in this activity. This project clearly demonstrates the value of involvement, leading to improved partnership working and better experiences.

Many thanks to Greg Cigan for this great blog about his study that explored how children and young people with an intellectual disability feel about undergoing clinical procedures.

From the outset of the study, I felt it was important to obtain data directly from children and young people rather than relying on parents and carers to speak on their behalf. I was keen to adopt methods during interviews that would enable as many children and young people as possible to take part, including those who find verbal communication challenging. After researching different methods, I chose to utilise Talking Mats as the innovative design of the tool offered children and young people the option to express their views entirely non-verbally should they wish to by arranging symbol cards. To date, I have interviewed 11 children and young people about their experiences of undergoing procedures. Each participant was between 7-15 years of age at the time of the interview and had a mild to moderate intellectual disability.

Prior to an interview beginning, I spent time describing and showing each child/young person a Talking Mat and asked whether they would like to use the tool during their interview. Out of the 11 children and young people I have interviewed, three used a Talking Mat. Those that chose not to use the tool were older children who were confident having a verbal conversation with me or those who had a visual disability and could not see the symbols. In all cases, the decision of the child/young person in relation to using the Talking Mats was respected.

The three children who used the Talking Mats were able to express their views non-verbally and also seemed to convey more information than some of those who chose not to use the tool. Viewing the symbol cards within a Talking Mat appeared to help children and young people break down information into smaller chunks which then made it easier for them to process and discuss. Indeed, using a Talking Mat led all three children to discuss information that was new to their parents who sat in while s/he was being interviewed. An example of a completed Talking Mat is shown below which was created by an 11-year-old boy during his interview. The boy clearly expressed that he did not enjoy his experience of having a clinical procedure. 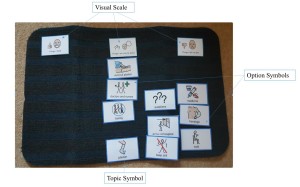 Within my study, I feel using Talking Mats has helped to augment the verbal communication of some of the children and young people which in turn enabled them to take part in interviews and share their views and experiences of procedures. Talking Mats are a valuable tool for researchers working within the field of intellectual disabilities. If used more widely, Talking Mats has the potential to enable more children and young people with intellectual disabilities to have the opportunity to be involved and express their views within healthcare research.

Many thanks to Shirley Rush Health Facilitator at Belfast Health and Social Care Trust for this great blog about using TM as a ‘weigh to health’.

Following my Talking Mats (TM) training I had the opportunity, as a health facilitator, to use TM in an adapted ‘Weigh to Health’ course. This course encouraged people with learning disabilities to make small changes to their lifestyle and to educate them on the effects of obesity and their health.

Prior to commencing the group work we met with each person and completed a Talking Mat. The topic was to explore “Important things to lose weight”, we used a wide range of symbols and included physical activity, health conditions and appearance. Clients also requested additional symbols were added including alcohol, cycling and mood, which made the mat individual to them. 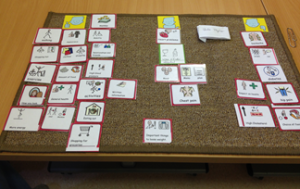 A photograph was taken of the completed TM to act as a record of what was important to them. On completion of the group the TM was repeated with each person using the same topic and symbols and the mat was again photographed. When we compared the TMs it showed that all the client’s knowledge and understanding of the effects of obesity and the health benefits associated with weight loss had increased.
“it done me good, helped me to lose weight by talking about my health and the need to lose weight to look after my heart”

The use of the talking mat was a valuable resource, it allowed each client to make an informed choice about participating in the group work. One client said he felt he had been listened too and “it done me good, helped me to lose weight by talking about my health and the need to lose weight to look after my heart”. By using TM in this way we have been able to use this information to demonstrate outcomes and it shows the information was presented at a level of understanding suitable for the client group. On an easy read questionnaire about the course all the clients agreed that doing the TM was useful, one person wrote “loved doing the mat”.

If you want to get more information from Shirley contact her at Shirley.rush@belfasttrust.hscni.ne