Conversation with friends is key to our well- being.

Talking Mats is a tool to maximise people’s capacity to communicate about things that matter to them.   For people with communication difficulties the ability to have a good conversation is restricted.  For this reason we have developed Conversation sets, described in an earlier blog http://www.talkingmats.com/talking-mats-conversation-sets/

The topics include Holidays, Gardens, Trips out, Sport.  Football even has one if its own!

Some of the members of the National Involvement Network in Edinburgh tried out the conversation sets.  Fiona’s conversation is generally limited to responding to questions and she has a tendency to agree with what other people say.  Using the Holidays topic, she told me that she liked camping and added that she had tried this a long time ago when she was a member of the Girl Guides.    I told her I had also been camping with the Girl Guides so immediately this created a bond between us.  Sharing experiences can be the start of a friendship.

David and James used the Football topic to chat about a recent match they had attended together.   Before using the mat to discuss the match they did not know that they had felt differently about the stadium and the crowd.  This was a surprise and stimulated further chat. Together they relayed a funny incident that had happened and we all had a good laugh- another aspect of building friendships.

David and James have good conversational skills but the Talking Mat took their conversation to a more detailed level.  For people who have difficulty getting involved in conversations these topics allow them to share experiences and find links with other people.

The Conversation sets are available to buy for people who have attended Talking Mats foundation training.

A conversation is an informal interaction, between two or more people, in which news and ideas are exchanged. Having a conversation can be an enjoyable activity for people and is an important part of socialisation but is often hard for people with communication difficulties to take part and hard for families, friends and staff to support these informal conversations as well as finding topics to talk about. We have developed a range of Talking Mats symbol sets called Conversation Topics which can be used by people of all ages and abilities to take part in conversations and have a chat.

These are now available to anyone who has completed a Talking Mats training course.

Each Conversation Set is made up of 3 topics with specially designed symbols. Click on the image to enlarge. 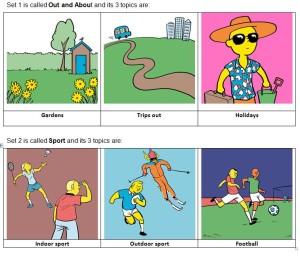 Examples of how this resource has been used during our pilot phase:

Gardens: A resident in a Care Home chatted about what she liked and didn’t like about the Care Home gardens and made some suggestions for changes.

Trips Out: A group of people at a Day Centre planned where they wanted to go for their weekly outings.

Holidays: A young man with a learning disability talked to his social worker about where he had gone on holiday and what he had enjoyed.

Indoor Sports: A woman with a stroke chatted with her friend about the sports she wanted to try at the local Sports Centre.

Outdoor Sports: A man with dementia talked about the sports he used to do when he was younger.

Football: A group of people with learning disability chatted about what they liked and did not like about a football game they watched on TV. This set provoked lots of lively discussion.

Keep a lookout for further sets in the future.

If you have completed a Talking Mats training course and would like to order these sets please contact info@talkingmats.com or phone 01786 479511

Other resources to expand your use of Talking Mats can be found on our website – www.talkingmats.com.

This is the second in a series of Student Placement Blogs written by a 4 the year Psychology Student, Celine Josephine Giese

I am almost halfway through with my placement at Talking Mats in Stirling.
As already mentioned in my last blog, my role involves reading and interpreting stories of Talking Mats to inform investors on their outcomes. Once accurately interpreted, I record the specific elements onto an excel spreadsheet. This allows me to clearly see the positive impact that Talking Mats has upon people, which is an enriching and rewarding personal experience.

After collecting the data from the stories, I will interpret the outcomes and design a suitable visual representation such as bar graphs. When collecting the data, I noticed that the layout of the excel sheet could make this analysis problematic. I discussed this issue with my supervisor and we agreed that I could design a more simplified data collection sheet. Designing a more systematic excel sheet has slowed the story collection down but will be beneficial in the long run.

In preparation for a meeting my supervisor had with the investor I analysed the data collected from the stories so far. I designed some bar graphs and added brief descriptions of the outcomes, for which I have received positive feedback. I enjoyed taking this initiative and the visual representations of my work clearly illustrate the positive impact of Talking Mats. The bar graphs and descriptions informed my supervisor and colleagues that some categories were too broad and open for accurate interpretation, which in turn has identified issues with data collection. In a meeting, we discussed issues and defined the affected categories to ensure that further data collection will be more accurate. From this meeting I have decided to double check every single story I have analysed far to ensure that the categories and data collected is as precise as possible.

The atmosphere at Talking Mats is very lovely and everyone is very kind and supportive if I have any questions. During lunch when we all sit together I get to know everyone a bit better and additionally learn a bit more about their projects. This week I will have my mid-review meeting with my supervisor, which I look forward too. The experience of working at Talking Mats has enhanced many of my skills. Firstly, I was afraid of working on such an important project independently, however it turns out that I really enjoy working on something on my own, which has increased my independence and confidence in taking on responsibilities. Moreover, I have learned not to be afraid to ask for help if I do not understand something or if I am not a hundred percent sure about something, which is important. I have analysed data throughout my undergraduate degree, which has been very useful for this project. Ultimately, this experience further improves my excel and visual presentation skills. I look forward to continuing with the story project and I am eager to help with the analysis and I cannot wait to see the final report.

P.S. Celine’s supervision meeting went very well!! Watch out for her next post.

We are delighted to have Celine Josephine Giese, a 4th year psychology student from the University of Stirling, on placement with us. As part of her placement she has to write a series of blogs which she has kindly shared with us. This is the first in the series.

Talking Mats is a social enterprise, that has developed a unique communication system that aspires to improve quality of life for people who struggle to communicate effectively, such as people with a learning disability or a stroke as well as people who have dementia. People who are affected by communication barriers have difficulty articulating their needs, emotions and wishes, which can be particularly challenging for carers and clinical practitioners.
The interactive communication tool consists of an actual doormat and different sets of communication symbols that are placed on the Talking Mat. The communication symbols represent a scale from positive, medium to negative. Specifically, designed topical image sets are used to communicate how the person feels about activities, eating, support and so forth. In addition, they also developed a digital app version. 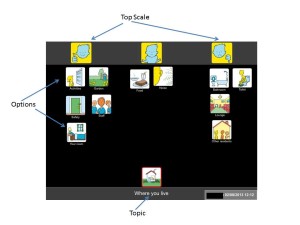 Talking Mats simplifies the communication process by breaking down information into small manageable chunks without the need for literacy. A range of training courses are offered to help individuals to use Talking Mats effectively.
The first day I arrived I was excited as I have not worked in an office environment before. In advance of the meeting I read a lot about their concept and ongoing projects to demonstrate my enthusiasm and interest. I was introduced to the team, who were all very kind and welcoming. During the first meeting, I was introduced to their communication system via a Talking Mat with a general interests’ topic to get to know me better. This was a great way to understand and see how their system works in action. We also filled out the placement agreement and discussed the project I will be involved in.
My role involves supporting Talking Mats in the analysis and impact of the training. For this I am looking at recorded Talking Mat outcome stories from trainees as part of a large-scale project in London Health Authority. I am recording specific details of the stories in an excel spreadsheet, such as the outcome for the patients which will aid the further development of Talking Mats and give feedback to the funders on their investment. Moreover, this analysis will shed light on the bigger impact Talking Mats has on the communication between patients and their carers.
The analysis will be useful in determining the impact Talking mat has on the person whose mat it is and on who used the mat i.e. the interviewer. In addition, it will provide evidence to the organisation of the effectiveness of using Talking Mats. My involvement in the thematic analysis will allow me to further develop excel skills and experience an office setting in a social enterprise, while expanding my knowledge on its origins, current use and future direction potential. Because the cases disclose patients’ personal details I have signed a confidentiality agreement. I look forward to learning more and contributing to the project as well as working with the team. The atmosphere is both pleasant and inspirational and I admire the concept of the enterprise and I feel privileged to be part of such a life changing organisation.