There are a few myths around about Talking Mats. What does it do? – It  supports communication and it doesn’t replace a person’s existing modes of  communication, be that speech, signing, a symbol book, a voice output communication device or app.  Talking Mats works alongside  these modes to help people communicate even more effectively about a particular topic.

Some more myths busted!    Click on the picture to make it clearer. 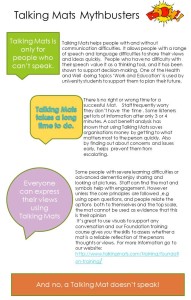 We are working with our colleagues at Strathcarron Hospice to develop a resource for Advance Care Planning which should be available early in 2018.

This poster illustrates how we are developing the resource:
2017 TM and Advance Care Planning

During the pilot phase our colleague Sally Boa (Head of Palliative Care Education, Research and Practice Development at Strathcarron Hospice) received the following moving story from Lorraine. We are extremely grateful to Lorraine for allowing us to publish it.

“My name is Lorraine and I am a carer for my husband who has cancer and is a palliative care patient.

I have been involved as a volunteer with Susan at Strathcarron Hospice since February this year. This was a group formed from the community put together by volunteers to get their help and opinions of thinking ahead and to understand what a loved one wants for their future and awareness of information and services available to people caring for someone with a long term illness/palliative care, but most importantly how best to get a loved one to open up and talk about their feelings and what they want for their future and arrangements.

Personally it has been for me interesting, draining and emotional at times, but this journey I have been on has made me think and realise that these are very important issues that need to be talked about with my husband and family.

I had tried to get Gordon to talk about these things, but it was difficult to bring the subject up. He just changed the subject. I tried leaving booklets lying on the table when I was out, but if he did look at them he never mentioned it.

Thinking about death is very emotional and stressful subject to talk to someone you love about. I know how I felt with these thoughts going round in my head and it was not nice. As for our two sons they seem to have accepted the situation now, although it was difficult. We have never lied to them and tried to explain what’s going on, but finding the right words isn’t easy. Moving to acceptance instead of denial is very, very hard on everyone.

I also have been involved with trying out Communication Cards (Talking Mats) which had been designed to help people who have difficulties in communicating. I went to the Hospice where I was asked some questions that I answered using the cards. I answered using the cards under the guidance of “feelings” I was surprised to find I had more positive replies than any of the others, I feel the cards would help people show their feeling better. I was asked if Gordon would be interested in doing the same. Sally emailed me a photo of my cards/answers, and I showed it to Gordon and I took the chance and asked him and he said yes. Sally came to the house and they did the task using the cards with no input from me {I kept very quiet ha ha}. The benefit Gordon got from this was really good. He was quite surprised to find he had placed more cards on the positive side as well his thoughts and feelings and he felt good about actually seeing that in front of him.

When Sally left I thought to myself this is my chance to approach the subject but again deep down I was scared as the last thing I wanted was to upset him.

I approached the subject with Gordon…. how about we continue chatting about what he wanted for his future and arrangements etc. I put it to him he knew what I was involved with for months with Susan and Mandy and that he was always interested to hear what we were doing but the truth was I still didn’t know what he wanted, I only knew he wanted a church service and burial. We sat at the table and talked about everything, I took notes what Gordon was telling me he wanted about everything.

I am an awful one for my Diary/ Journals I recorded everything we discussed finances, lawyer, wills, his wishes, Hymns he wanted, service at the graveside,what was to be given to family etc. in fact everything we could think of is now recorded and in one place. Both our boys will be told and where to find it. Jokingly to make it a bit light hearted I said I could go first you know, so we both took the opportunity to write and record all my wishes which is listed in the same journal.

Afterwards I really don’t know how to explain it but I felt a tonne weight off my shoulders, I now know everything I need to know.

More important for me I’ll never need to discuss it again with Gordon the book will be locked away safe and we can get on with our lives.

Please try and find the right time to talk, it’s very important and it will stop a lot of stress and emotional turmoil at what would be a very sad time for all.”

We are always very grateful for comments and suggestions about our resources, so have been listening to our customers and working to upgrade the Talking Mats Health and Well-being resource and the 4 digital resources.

There are several additions which apply to both the original and the digital versions of Health and Well-being.

Our App developer has also been working to incorporate all of the above features into the digital version. He has included a more comprehensive list of wording for the top scale. (Click on the image to enlarge) 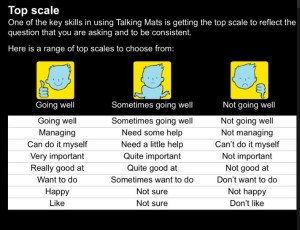 He has also added a feature which lets you toggle the wording for the top scale on and off; he has sorted the split words under the symbols and he has improved how the final record of the Talking Mats is displayed in the email sent.

Finally we are delighted to announce that our 4 main Talking Mats resources have been developed in German for the Digital version in collaboration with Professor Norina Lauer at the University of Idstein. All 4 resources – Health and Well-being, Children and Young People, Eating and Drinking and Social Care will all be available on the App by clicking on the German flag in the opening page.

The German version is not available in the original hard copy but you can order the resources with no words to allow you to add your own.

The upgrades to the digital will happen automatically in the next few weeks at no extra cost and if you would like the hard copy sets to upgrade your original resources, you can order them from us at a reduced cost. 2017-18 Additional Symbols Post Training Order form

Thanks again for your feedback – keep the comments coming!