Can the Social Care symbols be used with people with dementia?

I recently used the ‘Talking Mats Social Care’ pack in a Care Home with 3 residents, Ann, Barbara and Colin,  who all have dementia. Neither Ann nor Barbara were wearing their glasses but all three were able to see and recognise the symbols and use Talking Mats to express their views. All three conversations took place in the lounge where the TV was on, staff were moving around and and where other residents were chatting.

Ann, whose mat is at the top of this blog, used the ‘Activities’ set and very quickly understood what to do although at times she needed to be reminded what the top scale meant. She said she was a very happy person and didn’t think I would find anything that she didn’t like but as we went through the symbols she became more thoughtful and said that she did not like DIY, exercise or knitting and sewing. She used the mid-point to indicate the things she used to enjoy but does not do now. She was delighted when she saw how positive her overall mat was. 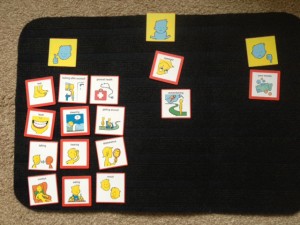 Barbara used the ‘You’ set to tell me how she felt about herself. Although she could have placed the symbols, she preferred to sit back, tell me what she thought and let me place them for her. She felt fairly positive about most things although she was aware that her eyesight and her memory were not as good as they used to be. She also joked that she never had enough money. 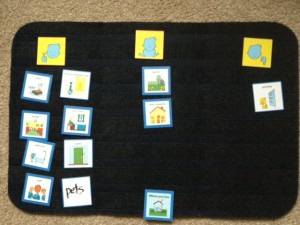 Colin has dementia and is also profoundly deaf. He has only recently moved into the care home so we used the ‘Where you live’ set of symbols. Colin said several times that he didn’t think there was any point in having a conversation as he can’t hear. However after writing down the reason for doing it, he gradually realised that he could use the symbols to understand what I was asking and then express himself. He said he was generally happy with the Care Home although he missed his garden and found it hard to make friends now as he cannot hear what the other residents are saying. He also felt there are not enough activities that he can take part in. He mentioned that he has a pet dog but doesn’t know what has happened to it since he moved. One of the staff said he would try to find out. He seemed satisfied with the final mat and staff felt it would be useful to use Talking Mats more with him to reduce his isolation.