We are frequently asked if Talking Mats can be used by someone who is blind and we usually say ‘not really as its essentially a visual tool’. However today I had to eat my words when I was interviewed by Ian Hamilton who is a BBC Scotland TV and radio reporter. Ian is totally blind and was accompanied by his guide dog – a very large but gentle German Shepherd called Renton. Here is a link about Ian and Renton

When Ian asked me to explain Talking Mats I guided his hand to the positioning of the 3 top scale symbols and then he immediately understood the layout of the top scale, the topic at the bottom of the mat, and where to place each option by touch. I simply explained each symbol, placed it in his hand and he did the rest. The topic was how Ian feels about Domestic Life and we had a lot of laughs about his dislike of shopping, laundry and cleaning. He explained that shopping was a nightmare for someone who is blind. He said that the dislike of laundry and cleaning showed that he was lazy – I think it’s pretty much what lots of people think!

However he was clear about a number of things that he feels very positive about, in particular his daily routine and his security, both of which are very important because of his blindness. Interestingly he said that his guide dog is clearly on the positive side of the mat, but not as a pet. A dog like Renton is not just a form of mobility, he’s also a fantastic companion.

Ian seemed to keep 1 step ahead of me and asked loads of great questions about Talking Mats as a thinking tool and its possibilities for other groups of people. He commented that, like inventions such as the typewriter and the phone, Talking mats is something originally intended for people with a disability, but which is now being used by people of all abilities to help them consider issues and then express their views.

Ian generously agreed to me writing this blog and using his photo. 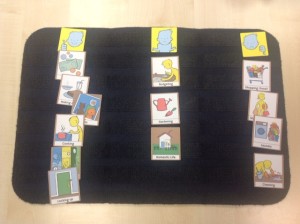 Hope he doesn’t mind me including a picture of Renton. This is also a first for me as I’m really scared of dogs – especially enormous shaggy German Shepherds!!

The programme will be broadcast on BBC Radio Scotland : Business Scotland on 24th and 25th May