Letting your child have their say at parent’s evening

I am a parent of a child in Primary one. We are expected to take our child along to the parent / teacher consultation meetings. After our first meeting I felt dissatisfied and no more informed. As a shy primary one, Eilidh gave no verbal feedback in the meeting, I felt I couldn’t voice any real concerns I had in case I knocked Eilidh’s confidence and the teacher was probably in a similar situation. Instead everyone was very nice but I left without any plan of action and no feeling that Eilidh’s teacher knew how she was feeling about her progress at school.

This time, I plan to be more prepared and to make sure Eilidh is properly at the heart of the consultation. I decided this time to use the new ‘Consulting Children and Young People’ pack, and felt the ‘my body and skills’ section was ideal for thinking about the key aspects of school life.

Eilidh engaged immediately with the mat and seemed confident with what the symbols represented. By the end of the mat and after going over it with her and checking if there was anything we had missed, I feel we have a really good starting point for discussion when we attend the meeting on Thursday.

The key points were:
Eilidh is most concerned about her drawing skills. Her face dropped when she saw the card. She perked up a little when she looked at the symbol as she decided she was good at drawing sunshine but not people. On discussion it turned out she really wants to be able to draw clothes on people. We talked about what we could do and decided she could do drawing practice with her dad (who is much better than me!). She was happy with this and has since already drawn a fully clothed person!

She is a bit unsure about numbers, writing and trying new things. These are things to discuss with the teacher but it shows her awareness of where she needs more support. Going to the toilet and drinking water both require her to ask the teacher for permission and she put those in the middle as she doesn’t always like to ask and often comes home with a full water bottle. This is something we can bring up and hopefully the teacher can reassure Eilidh it is fine to ask.

Finally, we were able to finish on a high as we acknowledged that she has really increased her confidence in talking (at school), reading and getting dressed independently. Again it really shows how aware she is of her own abilities and what she has struggled with in the past.

I would really recommend using the pack for this purpose. If I have time before the meeting I plan to use the other symbol sets to explore how she is feeling about the people at school (friends / teachers / support staff). By Morag Place 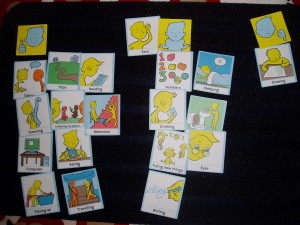