When people have been in hospital for a period of time, for whatever reason, consideration needs to be given to discharge planning. There are often concerns about what a person may manage to do independently when they get home, and this often has an impact on where people are discharged to and what type of support they might need.
The ‘looking after yourself’ symbol sets in the health and well-being resource provide a good starting point for exploring some of these issues. This set is made up of three topic sets:

I used these when I worked with a woman (Ruby) who had severe receptive and expressive aphasia. She had been discharged from hospital with a care package (carers came in three times a day to help her with personal care, meal time preparation and housework). Ruby had difficulty communicating through speech but was able to use Talking Mats effectively to express her views. I used the ‘domestic life’ symbols to find out how Ruby felt about managing the daily running of the household. Ruby was able to tell me that she felt she could now do more things around the house, such as hoovering and the laundry. She was ‘unsure’ about cooking and shopping, but indicated that these were areas that she wanted to work on.

Using Talking Mats, Ruby was able to tell me that she wanted to try to do more things for herself. We used photographs of the completed mats to discuss these issues in more detail with Ruby’s social worker and her husband. Initially, Ruby’s husband was hesitant about her doing more things around the house, but seeing the mat in front of him meant that he really listened to her views and felt happier about her taking risks and trying things for herself. As a result of our discussions, Ruby’s social worker reviewed her care package. She reduced the daily visits by carers and Ruby was given support from the rehabilitation team to help her work on preparing meals. Her husband arranged for a friend to take her to the supermarket once a week so that she felt more in control of the cooking. Use of Talking Mats meant that Ruby was really involved in setting her rehabilitation goals and ensured that her views were heard when her care package was reviewed.
The ‘looking after yourself’ symbols can be used to include people with communication difficulties in the decision making process. This is particularly important given the current legislative drive to promote self-directed support. Find out more about how to use Talking Mats by signing up for a training course at Talking Mats.

The Health and Well-being resource is based on the WHO International Classification of Functioning, Disability and Health (ICF) which is a framework which covers almost every aspect of daily life and can be applied over different cultures (WHO 2001). 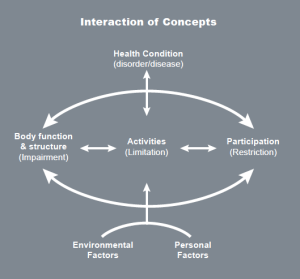 Use of the WHO ICF helps professionals to think holistically about the people they are working with. We have produced four sets of symbols, based on WHO ICF, to help people express their views about different aspects of their lives. These cover 13 topics: 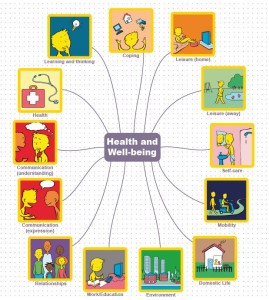 You can use the symbols in different ways, depending on the cognitive abilities of the person you are working with. For example, if you are working with someone who can understand abstract concepts, you could start with the 13 main health and well-being symbols. Your top scale might be ‘managing’ and ‘not managing’. Here is an example of a mat completed by Duncan who had a stroke which affected his ability to communicate through speech: 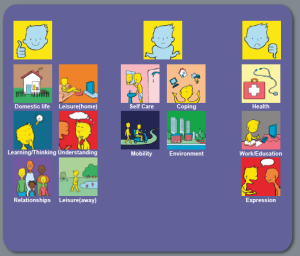 Using these symbols as a starting point, Duncan could tell us that his main concerns related to worries about his health, expressive communication and work. From here, we did ‘sub mats’ to help Duncan identify the specific areas he wanted to work on/explore.

Here is the mat Duncan completed in relation to his health: 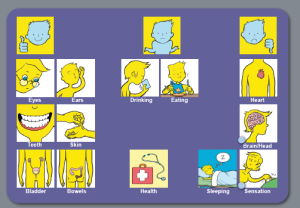 Having done this mat with Duncan, it became clear that he was worried about various aspects of his health, particularly the risk of having another stroke. The wider team were able to give him and his wife information about stroke prevention. Other mats were also completed, exploring expressive communication, work and education and higher level communication (which is included in the ‘learning and thinking’ topic, and covers written communication as well as memory and concentration). Using the Health and Well-being symbols, we were able to work with Duncan to help him identify the main issues that he wanted to work on and then work towards more specific rehabilitation goals. Duncan had copies of all the mats he had completed and found it useful to refer to them over the months. This helped everybody stay on track in relation to his goals and he was also able to track his progress over time.

Have a look at our Health and Well-being resource on our website. It is available both as an original Talking Mat with a physical mat and symbol cards or as a  digital version  as part of The Talking Mats pro subscription

I like my iPad and I LOVE the new Talking Mats app.
My 89 year old mum lives on her own about 2 hours from where I live and enjoys looking at photos on my iPad Mum has ‘all her marbles’, as the saying goes, and freely expresses her extreme views on current affairs, politics and photographs in Hello magazine! More difficult however, is discussing her failing energy levels and physical strength. She has till now resisted all suggestions of moving house to somewhere with more support.

I knew she would be interested in the Talking Mats app and a demonstration one afternoon flowed naturally into the Domestic topic of the Health and Well Being section. Suddenly we were in the middle of that difficult conversation we’d both been avoiding. Mum fully engaged with the app and changed the position of some items after consideration

The reality is she isn’t managing, she’s struggling. For the first time using the Talking Mats app she confessed to all domestic tasks being difficult even with the bits and pieces of help going in regularly.
The app made that bit easy. Making a decision about the next step will be more difficult.

“About half of all people with multiple sclerosis have some degree of problem at some time with aspects of thinking – memory, attention span or concentration. …. Many people may not recognise cognitive symptoms as an aspect of their MS and they can arise early in the course of the condition although the greater the disease duration and severity the more likely problems are to occur”. MS Trust
Talking Mats is one tool which can help people recognise any problems they may be having. It also provides a sensitive way for people to discuss these issues and plan ways to manage their situation.
We have developed a range of topics which encompass virtually all aspects of a person’s life
Insert mind map
The Learning and Thinking topic is particularly relevant. The following is an example of a Talking Mat done with Stella who has MS and lives at home with her husband and 3 children.
Top Scale Used: Managing: Need some help: Not managing 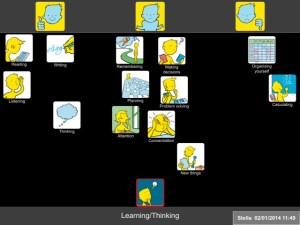 Stella began by putting most of the option symbols between the Managing and Need some help columns. However as more symbols were presented, she took time and thought about each symbol more carefully and changed her mind about many of them.

She said that using Talking Mats helped her realise that she was having some problems. On completion of the mat, she showed it to her husband and together they discussed practical ways of ways of managing her difficulties.

There are a further 12 topics in the Health and Well-being resource that can be helpful to people with MS. these are available either on our app or as Talking Mats original.

When I went back to the Care Home where I was piloting our new Social Care symbols the staff told me this story about Ann (see previous blog). Apparently she usually is very quiet and never joins in with activities or with other residents. However when we used Talking Mats with the Activitiies symbols, she told me that she really likes singing and had started singing to me. Later that day, one of the care staff had suggested that she sing again and Ann started a song with him. Gradually other residents joined in and they had a lovely sing-song with Ann leading it!

On another day I used the Social Care symbols with Dorothy who tends to go off track and repeat stories over and over. She was quite sure about what she liked and didn’t like about the Care Home and using Talking Mats was a gentle and easy way to bring her back on topic.

I want to go on holiday on my own!

At a recent training Jenn Hall who is a Personalisation Development Worker, told the story of her first use of Talking Mats. She used it with a woman that she has known for some time to discuss her views about her going on holiday. The lady is in her forties and has Downs Syndrome.  As she came to the people symbol she looked at it for ages and then placed it in the middle column explaining that she wanted to go on holiday on her own and visit her brother who lives in Spain without her parents. she had never been supported to do this and it was what she really wanted to do.  She also put the food in the middle column explaining that it was hard to understand the menus when she was abroad and that she wanted to learn a few basic words in Spanish. Jenn said that the Talking Mats really enabled the lady to express what she wanted not just go along with the status quo and for those around her to appreciate and understand her views . The Talking Mats has supported discussion with the family to enable this lady’s wish to come true . Hopefully she will have her first successful holiday with her brother visiting him all by herself.

Last Monday I was visiting my mum-in-law who is 95 and has severe dementia. She wasn’t great when I arrived and the staff said she was very tired. It was hard to understand what she was saying and she seemed very frail. For something to do, I showed her some of the new Talking Mats images on my iPad and she perked up and smiled at several of them.

I then took a risk and suggested she might like to use them to tell me what she thinks about herself. I was amazed as she looked carefully at each image, thought about it, made a comment and indicated where she wanted to put it on the ‘mat’. For the first time in ages with me she seemed to be in the present and not in some confused place in her mind

Here are some of her comments:

Hearing – she said she thought her hearing had got better ( I later discovered she had just got a new hearing aid that morning!)

Talking – she said it depends who she’s talking to!

Money – said she could always do with more!

She loved the pictures and took loads of time thinking about each one and really studied the whole mat at the end.

Her granddaughter Susan said: ‘I thought it was amazing to get a sense of what Grandma is thinking.  This may be silly but I actually felt really moved by it!  It’s so hard to get any sense out of Grandma these days so it was really fascinating to get an insight into her thoughts.’