Many thanks to Claire Wiseman & Ann Lafferty from The Advocacy Project (Scotland) for this guest blog, including a great example of how Talking Mats helped a young woman with learning  disabilities and psychosis share her views about being in hospital, receiving medical treatment and her preferences in respect of future post discharge welfare decisions:

Recently the Mental Welfare Commission published a best practice guidance on Supported Decision Making – https://www.mwcscot.org.uk/good-practice/guidance-advice, which we referred to as part of our presentation for the recent Talking Mats is 21 celebrations (click here to see the presentation Talking Mats and Supported Decision Making PP 2 (1)). The feedback from this session was that ‘yes’ there is a need for symbols to support legislation. As accredited trainers, we’ve also been asked when we’re delivering training to lawyers, Mental Health Officers, Social Workers, support workers and other advocacy organisations if there are specific symbols related to Supported Decision Making, particularly with regard to legislative issues. 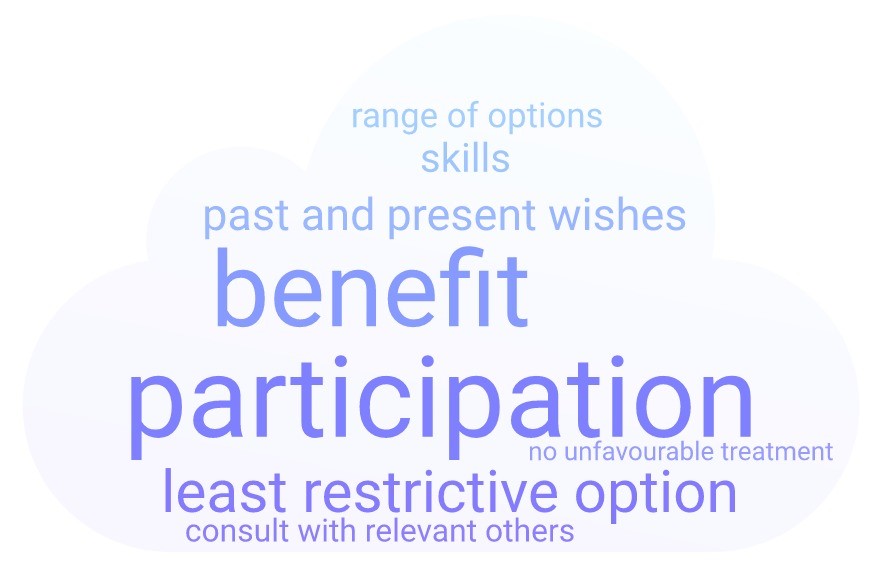 Here is one of the Supported Decision Making and Talking Mats examples shared in our presentation:

One of our staff supported a young woman with a learning disability who was thought to be experiencing a psychotic episode. She had been detained in an in-patient learning disability unit under the Mental Health (Care and Treatment) (Scotland) Act 2003 on a Short Term Detention Certificate. The clinical team then made an application for a Compulsory Treatment Order, which was granted. Later, when discharge planning was in progress, an application for Welfare Guardianship was made under the Adults with Incapacity (Scotland) Act 2000.

Although the young woman was able to communicate verbally, the effects of the psychosis combined with her learning disability meant that her conversation was discursive and she was very easily distracted. Using a combination of Talking Mats and our additional symbols over a number of sessions, the advocacy worker managed to ascertain her views about being in hospital, receiving medical treatment and her preferences in respect of future post discharge welfare decisions.

The Talking Mats reports were submitted as evidence at two mental health tribunal hearings and the Welfare Guardianship hearing at the sheriff court. We received positive feedback from the Curator Ad Litem, Mental Health Officer and Sherriff regarding the reports as they had never had Talking Mats reports submitted before during these proceedings.

The use of Talking Mats had been instrumental in supporting the young woman to put forward her views and ensuring an outcome she was happy with.

Going forward, Talking Mats and The Advocacy Project will be exploring the possibility of a symbols set for Supported Decision Making and legislation. We are currently looking at funding possibilities.

A fantastic example of the power of Talking Mats – if you have any Talking Mats stories you would like to share, please get in touch!  Just send me an email at  laura@talkingmats.com