Views of care in Hungary

Thanks to Agnes Turnpenny for her  guest blog on her research on  views of people moving form institutional care in Hungary.

There are approximately 15 thousand adults and children with learning disabilities living in large institutions in Hungary. The average size of these facilities is over 100 places, and living conditions as well as the quality of care are often very poor. The Hungarian Government adopted a strategy in 2010 to close and replace these institutions with smaller scale housing in the community. Between 2012 and 2016 six institutions closed and more than 600 people moved to new accommodation. The Mental Health Initiative of the Open Society Institute and the Hungarian Civil Liberties Union commissioned a study to analyse the experiences of the deinstitutionalisation process and as part of this research we carried out some interviews to explore the views of people moving out of the institutions.

The participants – five men and four women – came from one institution in the North East of Hungary, they all had mild learning disability and some had additional mental health issues. Originally the study intended to explore the experience of moving out but due to delays in the project this was not possible. Instead, we decided to examine the expectations of moving from an institution to a smaller home that allows more independence and personalised support. Although only one of the participants had communication difficulties – thus conventional interview methods could have been utilised – I decided to use Talking Mats in order to help participants to contrast their current situation with expectations about the future.

I selected the ‘Where you live’ topic from the Social Care package with some additional images from the ‘Leisure and Environment’ and ‘Relationship’ topics. (The English labels were covered over with a Hungarian translation as most of the participants could read). The question I asked was “How do you feel about these aspects in the institution?” and “What do you think they will be like in the new home?”. (I forgot to take a mat with us, therefore we had to lay out cards on the table.) 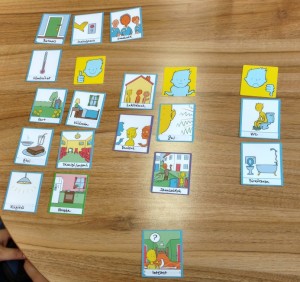 It emerged – unsurprisingly – from the interviews that most participants anticipated the improvement of their living conditions from the move, especially better facilities (mainly bathroom and kitchen). Some also expected other positive changes, particularly less conflict with other residents, less noise and better safety –commenting on the prevalence of theft in the institution. There were also many uncertainties; people said they were unsure about how they would get on with their new housemates, how the new support arrangements with staff would work, whether the neighbours will be welcoming etc. The photos illustrate some these issues.

Overall, Talking Mats proved to be a very useful tool in interviewing participants, who really engaged with the method. The images and the completed mats encouraged further comments and explanations on issues that participants considered important with minimum prompting. The drawings were easily recognised and appropriate in the Hungarian context without any adaptations other than the labels. Finally, I felt that the use of Talking Mats in this particular situation helped to overcome some of the power imbalance between the researcher and the participants by giving them more control when handing over the images.

We are really grateful to Agnes Turnpenny from The Tizard Centre University of Kent for sharing her experience . We really value our European work and European connections.